Blind Man That Can Climb Mountains

“How could this happen to me? Someone, help me, please.”

An outcry from John, as he felt helpless.

But who is John?

John Wong was a successful person. He was a scientist, specializing in Molecular Genetic Engineering and a forefront pioneer in forensic sciences. John was doing so well, it was the peak of his career…

Fate often finds its way to ravage people with strife, John was no different.

In 2005, at the peak of his career, he had a health crisis, and this was no ordinary health crisis, to the doctors’ eyes he was a lost cause, he was paralyzed from his neck down to his legs, he had no sensation, but he can move his hands.

“I can’t feel anything”, said John.

On top of that, while hospital-ridden, John’s organs malfunctioned to the point he couldn’t digest food, his heart had an erratic rhythm to the peak that he almost died; he couldn’t speak, urinate, and defecate.

But John’s consciousness was intact and he could hear everything.

While the nurses’ were cleaning and turning him, he was in pain as his organ moved due to muscle loss, “I was in pain, and every morning the nurses do it, I am in dread,” said John. He was miserable, the doctors wanted him to be intubated again, however, the fight in him was not over yet.

John decided to fight, he had a spark of hope in his belly that kept him afloat.

For over a year, the doctors couldn’t diagnose what’s wrong with him. As the glimmer of hope begins to fade, so is John’s retina, the ophthalmologist said to John that his retina was almost wiped out, everything was gray to him. This took the interest of medical professionals to research on John, as he became a case study.

He was in and out of the hospital due to testing for the case study. One remark from his physician, “it’s worse than cancer” because cancer has the medicine and his disease has none, to John’s family, were hopeless.

As the medical bills grew a whopping 500,000 dollars, He didn’t know how he could clean that up since his mother was only a cleaner and his dad was a driver, but with the grace of the divine spirit his company insurance covered it, and he emphasized the importance of getting insurance.

However, this is not how John envisions his life, he wants to drive, climb, scuba-dive, and the likes. But basically, he was disabled, his parents were taking care of him, he didn’t give up, he didn’t throw the towel just yet, he owed it to his parents and to the people who believed in him.

As he was going to his routine eye check-up at the National Eye Center and the results were still the same, he spoke to his physician and friend, “I wanna drive”, out of the frustration of his physician-friend he said, “Do you wanna talk to a psychiatrist?”John was never hopeless.

As the story unfolds, we can’t see a point of turnaround right?

But as John Wong, talked to Nicole Ling, his friend who is a powerful spiritual healer. John discovered that his turning point was when he gave up.

At his lowest point, John said — “Do what you want to do and I offer to you my life and my dedication to you”, from that point onwards John’s life was changed.
But it didn’t happen in one day, John emphasized that there are no shortcuts, and you have to work it out.

He prayed for four years with his spiritual group combined with medicine and a healthy lifestyle, the results were astounding. John can now see, walk, cook, drive, mountain climb, scuba dive, and all the things he wants – he was successful, and now a living testimony of miracles.

Moral of the Story:

When you are at your lowest point it is your most vulnerable, and the Holy Spirit is just right around the corner waiting for you, and at this point, we are most open to the greatest change.

The Holy Spirit is our spiritual insurance and stronghold.

Do you want that life-changing miracle? Stay tuned for more.

How To Receive Miracles Fast 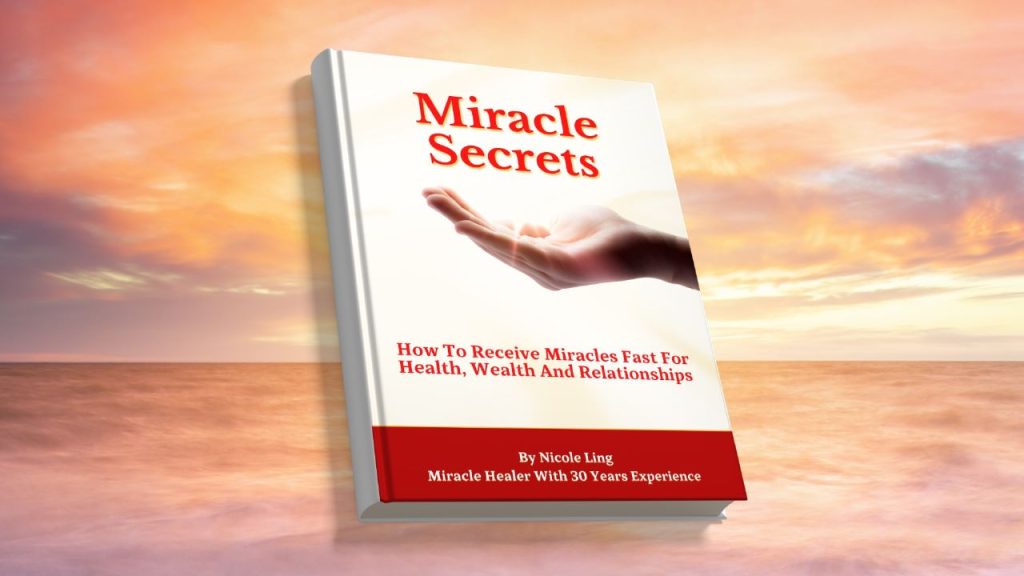 Miracles Happen To Those Who Wait

Miracle Healing enriches lives and those who wait are rewarded the most. It has nothing to do with our skills or education; rather, it concerns

YOU Can Be An Instrument For Miracle Healing

You must have read about our students’ spectacular results from their Miracle Healing, and wish to be like them.    Here’s how you can

This website is not a part of the Facebook or Google websites. Additionally, this site is not endorsed by or affiliated to Facebook or Google. All brands shown on this site belong to its respective owners.
The information provided on nicoleling.com, and in any reports, emails, ebooks, or other materials you might receive from us is for educational purposes only. We cannot guarantee the accuracy of information, and we are not responsible for how you interpret or apply it.